LAS VEGAS – Josh Gray sat high above the Las Vegas Strip last Wednesday night in the Stratosphere Hotel and Casino tower with a cocktail in one hand and his Blackberry in the other. The senior media executive for the social networking site PerfSpot had just spent the last eight-plus hours at the GPWA Conference when he was asked what he enjoyed most about the day that was full of affiliate marketing sessions.

"Well, let me put it to you this way," he said as he pointed to his Blackberry and scrolled through an inbox jammed full of unread e-mails. "I received 300 e-mails today. At least 60 or 70 of them are going to need a direct response. So needless to say, the last thing I need tomorrow is a meaningless follow-up e-mail from someone I don't remember.

"And when you go to some of these giant networking conferences, that's inevitably what ends up happening. The difference between those types of conferences and the GPWA Conference is that when I leave here today, I'll remember all of the people I met and when we follow-up with each other, it's going to be beneficial for both of us. That's why making the trip here was worth every second." 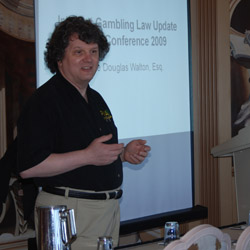 Gray's comments were echoed by most of the people who attended the conference that was held on the 103rd floor of the Stratosphere, just a few miles away from the Rio All Suites Hotel & Casino where the mammoth Affiliate Summit West 2009 was also taking place. Free admission was granted to the GPWA Conference for all affiliates, program managers and affiliate marketing professionals as GPWA Executive Director Michael Corfman and five other speakers addressed attendees on topics including legal advice, using video on the web, and driving more quality traffic to their sites.

In addition to the five sessions and a complimentary lunch, visitors to the conference were also treated to a cocktail party with hors d'oeuvres (sponsored by CanAffco.com) while they took in the incredible views of the Strip as the desert sun was setting. (Click here for a complete photo scrapbook of the conference and party).


"This is what networking is all about," said GPWA member "Potsie" as he scanned the cocktail party. "I thought all of the sessions were real informative and now we have a chance to get together and discuss them over drinks. It was well worth my while."

The day began with Corfman's opening remarks, followed by the first session of the day, which was a talk about legal issues for online gaming affiliates by Clarke Walton, a Las Vegas-based attorney who specializes in Web site legal issues and operates the GPWA-approved portal AllVegasPoker.com. Corfman followed Walton with a session about how to marry iGaming affiliate marketing and social networks.

Other speakers during the conference included James Traynor, a founding partner of Syntryx Executive Solutions who discussed how to evaluate affiliate Web sites, and Victor Pitts, the VP of sales and client services for Moniker, who talked about driving traffic through smart domain strategy.

The conference was capped off by an appearance by APCW Executive Director J. Todd and APCW Auditing Director Anthony Telesca, who joined forces to demonstrate how to effectively and practically use video to enhance a Web site.

"There was really a nice range of topics that were beneficial to everyone who was here," noted Erin Argue, the affiliate program director for BetUS. "I was in town for the Affiliate West show and I wanted to be here today to support the GPWA because it's an organization that has proved to be beneficial for us.

"When you go to the big shows everybody is so busy. This is a much more intimate setting and it's a great opportunity to actually sit down and have a conversation with someone. I had a great time." 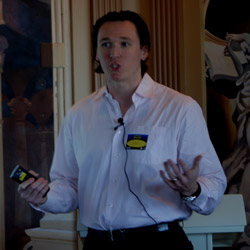 GPWA member "matted," a regular contributor to the GPWA forums, said that both the wide variety of speakers that were scheduled for the conference as well as the chance to meet some of his fellow members in person was the main draw for him.

"It's so much easier to establish a relationship with someone if you get the chance to meet them in person and this was the perfect kind of forum to do just that," he said. "I learned a lot. I was particularly interested in the legal session. I thought [Clarke] was great. I had a feeling that was going to be informative so I'm glad I made it here."

Gray, who flew in from Arizona just for the day, added that he felt it was important to show support for the GPWA, an organization he has become quite fond of.

"I really appreciate the way Steven and Michael [Corfman] do business so I've become a big fan of the GPWA," said Gray, who recently started his own portal Web site called CasinoFlow.com.

"This is a great industry. It's a close-knit industry so I always jump at the chance to get away from the computer and meet face-to-face with clients or colleagues. When there's a smaller group like this you have a chance to get real work done. You get to have detailed conversations and you get to do so in person with a drink in your hand looking down on the Las Vegas Strip. What's better than that?"