Dan Podheiser has covered the gambling industry since 2013, but he has been an avid poker player for more than a decade, starting when he was just 14 years old. When he turned 18, he played online poker regularly on U.S.-friendly sites until Black Friday in April 2011.

LAS VEGAS -- The 2014 November Nine is set, and a familiar face is back chasing the gold bracelet.

But this time around, the Los Angeles pro is one of the favorites to win the $10 million first-place prize. Newhouse finished Day 7 in third place with 26 million chips, knocking out three players Monday on his way to the final table.

Newhouse was not happy with his ninth-place finish last year. He's not going to let it happen again.

"I would rather finish 10th than ninth," Newhouse said. "Ninth is brutal, man. Coming back four months later and getting no money -- I told myself I wasn't going to be disappointed (at the time), but it was very disappointing."

The November Nine will play for a $10 million first-place prize at the Main Event final table. (photo by Dan Podheiser/Casino City)

But this year, there was a visible difference in Newhouse's demeanor at the table. The experience of coming so close and falling short had clearly paid off.

"You know, last year I was probably nervous," Newhouse said. "This year I was relaxed. I was playing poker."

The final table will reconvene in the Penn & Teller Theater at the Rio All-Suite Hotel & Casino on Nov. 10. The nine remaining players will play down to the final two, who will resume heads-up play on Nov. 11.

Jorryt van Hoof, from the Netherlands, is the chip leader with 38.375 million. He entered Day 7 in 15th place with just 5.365 million chips, but consistently chipped up to the top of the leaderboard.

"What didn't go right?" van Hoof responded when asked how he was able to gain the chip lead. "Everything went right. I felt really focused the whole time."

Bruno Politano is the November Nine short stack with just 12.125 million chips. But the Brazilian had by far the biggest cheering section in the Amazon room. He played at the ESPN featured table throughout the day Monday as his strong crew of Brazilian supporters chanted and yelled whenever Politano won a pot -- and sometimes when he didn't. There was even one fan who showed up in a Scooby Doo outfit. Expect them to be back in November.

William Pappaconstantinou, a.k.a. Billy Pappas, is in sixth place with 17.5 million chips. Pappas, from Dracut, Mass., is one of the top foosball players in the world, and travels the globe competing in the sport's major tournaments.

Pappas is going to Germany for two months soon, where he will gloat to his foosball friends about his accomplishments on a different kind of table.

"They know I play poker a little bit," Pappas said. "But I don't think any of them would have ever expected this."

Each remaining player was paid the ninth-place prize of $730,725 on Monday night. 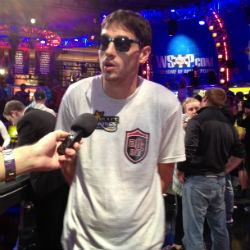 The November Nine "bubble boy" was Luis Velador, a two-time WSOP bracelet winner from Mexico. Velador started the "unofficial" final table of 10 with roughly 20 million chips, but lost two key pots that led to his demise in 10th place ($565,193).

On the first hand, Velador called Larrabe's pre-flop shove for 10 million chips with A-K, only to see Larrabe table A-A. And on the final hand of the night, Velador 3-bet shoved all-in with 4-4, but Newhouse made the call with 5-5.

Velador exited the Amazon Room at the Rio quickly before he could be interviewed.

Two hands earlier, at the secondary featured table, Christopher Greaves was crippled by Pappaconstantinou. After Jacobson opened to 650,000, Pappaconstantinou 3-bet on the button to 1.35 million. Greaves then looked down at Ad-Qs and shoved from the small blind for 8.45 million, but when Pappaconstantinou called with Ks-Kc, Greaves knew he was in trouble.

Stephensen won the biggest pot of the night when he knocked out Tom Sarra in 15th place ($441,940). With the blinds at 120,000/240,000/40,000, Newhouse raised to 500,000 under the gun plus one. Sarra and Politano both flat called before Stephensen cut out a raise to 2.25 million from the button. Newhouse folded, and then Sarra raised to 6.75 million, more than half his stack. After Politano mucked, Stephensen quickly announced he was all-in, and Sarra was pot committed.

Stephensen turned over As-Ks to dominate Sarra's Kd-Qh. The 8s-9s-Ac flop all but killed Sarra, and the 7h on the turn officially eliminated him in 15th place and netted Stephensen a 22 million-chip pot.

Dan Smith, who has more than $8 million in career live tournament earnings, entered Day 7 seventh in chips with 10.33 million. But Smith was the first major casualty Monday when he went out in 20th place ($286,900).

Scott Mahin, an amateur from Elk Point, S.D. playing in his first Main Event, survived all the way to 18th place ($347,521) before being eliminated by Larrabe. Mahin got all-in with Th-8c on a 6d-Td-8h flop for top-two pair, but Larrabe tabled Ad-Kd for the nut flush draw. The Ac turn gave Larrabe 17 outs to win, and the 9d on the river gave him the flush and sent Mahin home.

"It's been unbelievable, surreal," Mahin said about his first Main Event experience as tears of joy streamed down his face. "It has completely exceeded my expectations. I always wanted to play poker and knew I could, and I proved it."

Mahin was one of the few amateurs remaining in a strong field of professionals. But he didn't waiver. Mahin entered Day 7 in 25th place with just 1.46 million chips, but survived nine eliminations to move up to the next pay level.

"I didn't really get nervous when I played cards," Mahin said. "I was nervous before, and I was nervous at night at home when I got back to the room. But as soon as I got to the table, I calmed down because I love playing poker. I just love it."

Las Vegas pro Sean Dempsey was the first player eliminated on Day 7. The 2014 bracelet winner in the $3,000 No-Limit Hold'em event called Newhouse's under-the-gun min-raise in the big blind with pocket kings in an attempt to trap Newhouse. Dempsey check-called a bet of 260,000 on a 6d-4h-Qh flop, then both players checked the 5s on the turn. When the Jh hit the river, Dempsey led out for 550,000 and called Newhouse's raise to 2.8 million, effectively putting Dempsey all-in. Newhouse tabled 8h-9h for the flush and took the pot.

"It's been a great experience and I had a blast, but to go out on such a sour note, feeling that you may not have played your best, is a very, very poor feeling, and it hurts," Dempsey said as he exited the Amazon room. "You think you might be right, and then it turns out you were way, way wrong. It's gonna be 90 minutes of me feeling like an idiot, and I'll be fine with it."

Devonshire said his past experience going deep in the Main Event probably gave him an edge as the days waned. But the 32-year-old wasn't thrilled about the tournament's time structure.

In 2011, when Devonshire finished 12th, the Main Event played out over eight days prior to the November Nine. This year, Day 7 was the final day scheduled.

"I made some mistakes last night," Devonshire said. "I'm not very happy with the new structure of trying to get this done in seven days instead of eight days. Having a 13-hour day lead into a 14-hour day is just exhausting."

Bracelet winner Leif Force, another player familiar with making deep runs in the Main Event, busted in 21st place ($286,900) when he shoved his 2.4 million chips from the button with Kd-Qd. Christopher Greaves then moved all-in from the small blind and tabled As-Td. The flop brought 9d-Ts-Th, and Force did not improve.