Abby Messick
Abby served as an associate editor for the Casino City editorial team for three years, between 2015 and 2018.
More about Abby Messick
More articles by Abby Messick 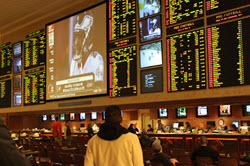 It seems that nationwide sports betting in the U.S. may soon have its day.

Late last year, New Jersey brought a case to the Supreme Court to banish the Professional and Amateur Sports Protection Act (PASPA) and legalize sports betting. In preparation, states across the U.S. have offered up their own versions of sports betting bills. More than 10, in fact, which made paring down this list quite difficult.

(Keep in mind that these bills hinge on the fact of PASPA, the villain of this week's top 10, being overturned via the New Jersey case. Which could happen. Or it could not. Not very reassuring, we know, but these are the times in which we live, unfortunately.)

10. Maryland
Maryland is one of the most recent states to float sports betting legislation, having had House Bill 1014 pass the House in March. The two-page bill would allow the State Lottery and Gaming Commission to hand out sports wagering licenses and suggests the matter of sports betting be added to the November ballot as a referendum for voters.

Under the terms of the bill, sports wagering revenue will be funneled into the state's Education Trust Fund.

9. Missouri
Another state making tracks is Missouri, where quite a few sports betting bills are on the table. Three of note are as follows:

H 2320, introduced at the beginning of the year, is a one-page bill that names the Missouri Gaming Commission as the go-to group for establishing sports betting standards.

H 2406, introduced in February, is a little more in-depth, suggesting a 6.25% revenue tax and limiting sports betting to riverboat casinos.

H 2535 is the favorite of the NBA and MLB, as it includes the stipulation that sports leagues should earn an "integrity fee" of 1% on all sports bets. The tax rate for this one is 12%.

At this point, it's difficult to say which will make its way through the system.

In March, the WV Sports Lottery Wagering Act became law, paving the way for legal sports betting, should the U.S. Supreme Court decide to do away with the federal ban. (The state was the first to give the OK to such legislation in 2018, and the sixth to do so in recent times.)

Gov. Jim Justice said in a statement made soon thereafter that lawmakers should reconsider the terms of this legislation, and perhaps strike another, better deal with organizations like the MLB, who presumably stand to make a ton of money off legal sports betting, should things be changed the way they want.

In a press release, Gov. Justice said, "After the U.S. Supreme Court issues its decision on sports wagering, to address any provisions of the legislation that might be in conflict, I will ask the Legislature to look at the advantages of partnering with the major sports leagues. I believe there could be real value to this partnership. I expect the Supreme Court to rule on this issue in the next few months."

7. Massachusetts
There are no sports-betting-specific bills in Massachusetts right now, but key lawmakers are generating interest. State Senator Eileen Donoghue has introduced SD 2480, which would form a committee to study, regulate and examine further the idea of legal sports betting.

A white paper released by the Massachusetts Gaming Commission in March touches on legislative movement in other states, takes a look at any other federal laws that could possibly impact sports betting in the U.S., and eyes potential operators.

Plainridge Park, Wynn Boston Harbor and MGM Springfield are throwing their support behind sports betting, as well. Perhaps most importantly, the white paper comes to the conclusion that sports betting would be a welcome new source of revenue for the state. And we all know how convincing an argument money is.

6. Pennsylvania
While some other states on this list are scrambling to get legislation passed, Pennsylvania is resting on its laurels – it took care of that back in October 2017.

HB 271 in particular will allow the state to offer sports betting in relatively short order, should – yes – the horrible PASPA ban be overturned.

5. Mississippi
Around this time last year, Gov. Phil Bryant signed H 967, which legalized daily fantasy sports. The bill also contains language opening up the possibility of sports betting should PASPA be overturned, making the state primed for regulation and legalization.

However, things aren't quite that simple. H 1113 reared its ugly head in January, seeking to prohibit sports wagering outright. It seems that a few lawmakers were unaware of the sports betting language present in the bill when it passed last year, and now they're scrambling to undo what they consider a mistake.

Additionally, H 1154 aims to set up a commission to study the possible effects of sports betting and to "recommend best practice taxation policies." The created committee will report its findings in 2019, meaning legal sports betting will have to take a back seat until then.

4. Georgia
Georgia's gearing up to take the plunge into gaming, it seems. Though the state has no casinos and no forms of gambling available other than the lottery, there's been recent talk of building a racino that could potentially generate up to $1.2 billion in revenue. A 300-room hotel, a horse race track and slot machine areas are, of course, included in this racino plan. It's not sports betting-focused, but it's a start.

A study by Lewis Group Management Consultants – the very same minds that suggested the racino in the first place – posits that the construction of the facility could create 4,000 jobs, the finished product would offer 2,225 jobs and generate $310 million in both state and local taxes in the first year, and it would "boost rural development."

So far, state legislators seem amenable to the idea. Rep. Brett Harrell and Sen. Brandon Beach are hard at work, dedicated to introducing 2019 legislation that would allow for three racino locations across the state, according to the Atlanta Business Chronicle.

There are quite a few bills circulating in Illinois right now, none of which have made much progress. HB 4214 popped up in early January, acting as a placeholder bill to be filled in with the appropriate sports-betting-legalization language later. Toward the end of that month, SB 2478 – the Sports Betting Consumer Protection Act – appeared, setting up a framework for legalization and regulation.

February saw the additions of SB 3125, HB 5186 and SB 3432 into the mix, all noted as "sports wagering acts" on the Illinois General Assembly website. Despite the sheer number of bills they're hurling at the wall, for now it doesn't seem as though anything is going to stick. But that doesn't mean sports betting in the state is without its supporters.

Pro golf organization PGA Tour supports the legalization of sports betting, taking a stand with the NBA and MLB. PGA Tour said in a statement, "We believe regulation is the most effective way of ensuring integrity in competition, protecting consumers, engaging fans and generating revenue for government, operators and leagues. We are aligned with the NBA and MLB in this area, and we are looking for ways to collaborate with legislators, regulators, operators and others in the industry on regulation that serves the interests of all involved."

2. Connecticut
The Connecticut Lottery Corporation remarked in a meeting last week that it's "ready to operate sports betting." Director of IT Steve Wager commented that sports betting is particularly suited to the lottery scene, and it would "just be another option."

SB 540 will allow casinos, horse racing tracks and off-track betting facilities to offer sports betting, in addition to language that allows for internet wagering and online lottery sales. But though SB 540 has seen some support, SportsHandle points out the egregious 15% tax revenue, which, as we know from prior experience, is killer.

This new Connecticut sports betting bill is pretty bad. It represents a hodgepodge of ideas we've seen floating around, but worst among them is the tax rate on gross sports wagering revenue. 15%. https://t.co/aQpkA5IBRq pic.twitter.com/vs3wTFU7HY

Not to mention that the state's tribes aren't exactly happy with the bill's proposed integrity fee. In a written statement on behalf of Foxwoods, Executive Director of Online Gaming Seth Young said, "While we support the legalization of sports gambling, as written this bill takes the power out of the hands of the state and transfers it directly to the sports leagues, where the leagues themselves would have the sole power to decide whether or not Connecticut will be allowed to try to recapture its illegal black market. The demands of the sports leagues make supporting this bill, as written, a vote for the continued success of the unregulated black market, a vote against revenue enhancement to the state, and a vote against common sense."

1. New Jersey
There was no way New Jersey wasn't going to be No. 1 on this list.

Though the state repealed sports betting restrictions in 2014, various roadblocks have prevented the law from taking effect, including the thorn-in-our-side Professional and Amateur Sports Protection Act of 1992, which banned sports betting except in Nevada. The argument was that New Jersey allowing sports betting would be a violation of this ill-conceived law.

The state had had enough in December 2017, appealing to the Supreme Court, arguing that PASPA is unconstitutional and should be done away with for good. This spawned the Christie vs. NCAA court case, also known more simply as the New Jersey sports betting case.

And that's where we're at right now – awaiting a decision. And as to when this decision will be made, we're not really sure, but next possible opinion dates are next week (17 and 18 April). Stay tuned.
Top 10 US states to legalize sports betting is republished from Online.CasinoCity.com.